I have been kicking a soccer ball around since the age of five and haven’t stopped since. I played in a recreational league throughout my youth. Once I was old enough, I was a part of a travel indoor and outdoor team. By the time I had reached high school, I had already been playing for 10 years.
However, I will never forget how nervous I was for try outs the summer before my freshman year. Coming from a very small elementary school put me and my childhood friend at a slight disadvantage. The girls coming from the junior high already knew everyone trying out. The coaches already knew some of them as well. We prepped over the summer by attending soccer camps during the day and running in the evening. Our hard work paid off because we both made the freshman team. To top it off, our team went on to have one of the best seasons yet. I continued playing through my junior year. Unfortunately, an injury I obtained from rowing crew didn’t allow me to play all throughout high school. 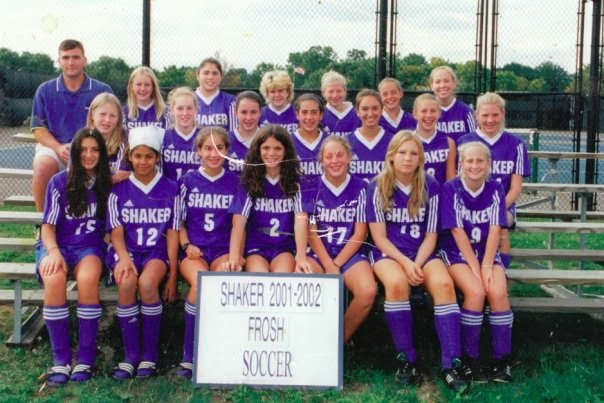 Post high school graduation I knew I was not going to play at the college level especially since I attended a Division 1 school. I was not ready to “retire” yet though. There is a local indoor soccer facility that runs several different leagues of all ages, genders, and skill level. I joined a woman’s league to start out. This team consisted of the girls who I had been playing with all throughout my life. Eventually, The Gym Class Heroes were formed. This team was coed consisting of a mixture of friends and family. We had people who had never played soccer in their life and others who have been playing for years. It didn’t matter though. We were there just to have fun. The team continued on for several more years. People came and went. Today, there are only two of us from the original team still playing. We play in the mens league (myself being the only female) and now go by Above Relegation. It’s pretty funny though because those who are on my team now I only know because of soccer.

Soccer is one of those things that will always be a part of my life. Even when I am no longer able to play, I would love to try coaching again at any age level. And though I am far from the best player on the field, I love to play. The competitive nature is a great stress releaser plus its a great means of exercise. It really is one of the highlights of my week. I hope to continue playing for many years to come.

Side Note: I tried getting a team photo after our games tonight, but everyone was so tired and ready to go home after two long games I was unsuccessful.